I was hoping to get one more White Mountain ride in this season. I was looking for a perfect weather day before foliage season really starts. Today was that day.

I got a bit of a late start and then hit traffic on 495 (accident) and 93 (road work) so I didn’t arrive in Lincoln until about 10:30. As is my custom, I go straight to Subway. I sometimes order a 6 inch and sometimes a 12 inch sub. Knowing the climbing I’d be doing today, I went with the 12 inch chicken sub. I ate it quickly and then went back to the White Mountain Visitor Center (WMVC). I kitted up only taking one water bottle because I knew I’d be coming back this way to refill.

I had noticed before that the beginning of route 118 had been repaved but I didn’t know how far it went. Today I’d be taking that route so was hoping it was all repaved. This road, also known as Gonzo Pass, has had terrible pavement for years with huge cracks and massive frost heaves. I was happy to see that the whole road had been repaved. It certainly wasn’t a fantastic job as there were already some cracks showing but they were nothing like before and the heaves had been removed. This is a good steady climb. I reached the apex at 9 miles. I had only planned to continue down the other side if the pavement had been redone. It was downright dangerous before with a chicane section that I know had caused a cyclist to suffer a serious crash, careening into the guardrail.

It was much better and I could let my speed run out much more than my last descent here. I topped out at 45.13MPH. I still feathered the brakes at the twisty guardrail section because I wasn’t 100% sure that the heaves had been fixed. They were. I continued to route 25 which entailed road that was almost all downhill though at a much gentler gradient. I had never ridden 118 in the opposite direction (from west to east) so this return on it would be new. It’s roughly the same difficulty of climb in both directions. I’d say the descent heading back towards Lincoln is slightly more fun. It has plenty of twisty sections and I achieved a max speed of 45.57MPH. Having never down the descent in this direction, I was somewhat cautious but still enjoyed some high speed turns.

I had now completed two rigorous climbs and was soon to take on my third as I turned onto 112 to head up Kinsman Notch. I’ve done this climb quite a few times. It’s challenging but nothing crazy. I turned around at the Beaver Brook trailhead. I completely finished my water on the ascent and was hoping there’d be a water source there but couldn’t find one. I didn’t spend any time there but got back out on 112 to begin the best descent of the ride. I pedaled as hard as I could into it and then tucked. I could feel a slight crosswind that prevented me from reaching a record speed but I still hit my third fastest at 54.16MPH. Maybe because I’ve now done this descent quite a few times, it didn’t really seem that fast to me and I wasn’t nervous at all. My bike handled perfectly.

I get back down to Lincoln and turn into the WMVC to refuel. I added a second water bottle, ate four bars and an energy gel. I was only stopped less than 10 minutes. I had planned to go to the other side of at least one of the peaks and had already accomplished this with Gonzo. I was toying with the idea of also going over the Kancamagus summit down to Bear Notch but wouldn’t make up my mind until I reached the summit of the pass.

By now the wind had picked up some and it was behind me for the ascent of the Kancamagus. I was pleasantly surprised to see that repaving had taken place on this road as well starting about ½ mile before the hairpin turn. The wind definitely helped with the climb but I decided that four major climbs were going to be enough for today and made up my mind to not proceed over the pass and down the other side. I stopped briefly at the lookout parking lot at the top of the pass, consuming one more energy gel. The nice thing was that I knew it was practically all downhill all the way back to the visitor center and I’d get to experience the new pavement on the descent. The first part is quite steep and then there’s that fairly sharp turn to the left. The pavement had been so bumpy before that I never felt comfortable going all out but this time I did no braking and my bike held a perfect line on the turn. The wind was against me though so that did lower my speed. I only reached about 43. I pedaled hard on much of the 13 miles going back to Lincoln. The traffic everywhere today was very light and this included even the Kanc. The foliage has definitely started to turn and I actually saw more color than I expected but especially during midweek, the crowds just aren’t around yet.

I pulled into the WMVC feeling tired but not as exhausted as some rides. I probably could have gone down the other side of the Kanc but it would have been a slog. The ascent from the Conway side just seems to go on forever. I prefer ascending from the Lincoln side. It’s not always easy to get 100 feet per mile elevation gain on paved roads in the White Mountains. I just achieved that mark and this made my third ride having done so, the other being rides I had done in Tennessee.

I still need to get a camera that I can bring with me on the bike. I did bring a larger one and took before and after pictures but only from the parking lot. 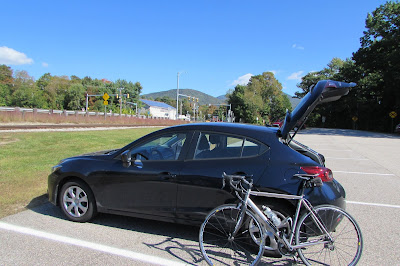 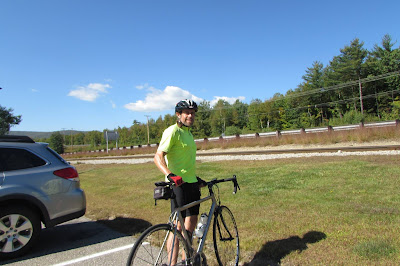 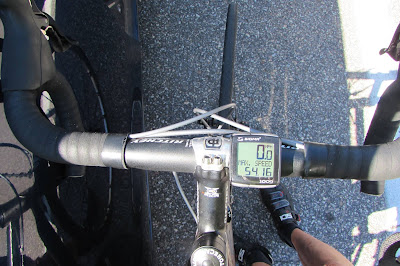 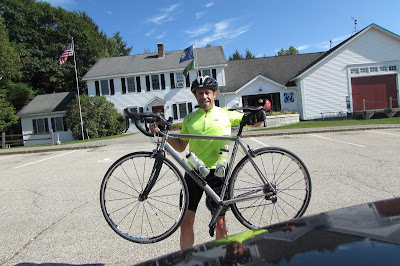