We just got back from one of the best vacations. We had a family reunion in Tennessee timed to coincide with the solar eclipse of 8/21/2017. I thoroughly enjoyed seeing the eclipse and spending time with so many family members. There was more to the vacation for me. I brought along my bike and was able to experience riding unlike any that I’ve done before. I’ve done mountain riding before but not on this scale. It was a treat that I’ll never forget. I was able to do three rides totaling 206 miles. I didn’t have a laptop nor a smart-phone to post earlier. I’ll post more about the vacation later but for tonight I’m recounting the best ride of the three (the other two were almost as good) but my ride to the top of Clingman’s Dome was particularly special.

Smoky Mountain National Park was closed the day of and the day before the eclipse so I couldn’t do the ride when we first arrived. I ended up doing this on Friday, August 25th – the day before we left. However, on the Thursday, we all drove up to the top of Clingman’s Dome taking the very route that I would cycle the next day. This allowed me to check out the roads as well as take some pictures from the top that I wouldn’t be able to do when cycling. We arrived just before sunset and saw some spectacular views.

Our cabin was aptly named Above the Clouds and it sits about 1000 feet above route 321 less than three miles below! Almost 1000 feet of that is gained in just over a mile! So, as with all rides from the cabin, mine started with an extremely steep and twisty descent having to brake heavily. I then popped out on 321 which has excellent pavement but very little shoulder. I was only on this briefly before taking the left onto Line Springs Road. There’s a bit of really steep climbing but then things moderate comparatively. I took the left onto Little River Gorge Road which becomes Fighting Creek Gap Road. Eventually it comes out to Sugarland Visitor Center at the intersection of route 441. The only potential drawback to the Clingman’s Dome ride is that route 441 doesn’t have much of a shoulder and it can get lots of traffic. I could see from the night before though that the road was fairly wide. I was able to get an early start of 7AM from the cabin so it was still fairly early even by the time I reached 441. This intersection begins about 20 miles of almost all climbing! I had never done such an extended climb before.

As I hoped, the traffic was pretty light going up and drivers were very respectful almost to a fault as some were very hesitant to pass me even when there was ample opportunity. Some motorcyclists gave me the thumbs up as they passed and I even noticed a passenger in a car also do this. They probably don’t see cyclists doing this very often and I appreciated their encouragement. I stopped thrice briefly to stretch. I passed through two tunnels but both were short and didn’t present too much of a lighting problem. After about 13 miles of climbing, I took the right onto Clingman’s Dome Road. Here the traffic was even less. The temperature had dropped some but it was not too cold. I picked the perfect day because it wasn’t too hot anywhere nor too cold. I reached the top and there didn’t appear to be any place to get water and I was almost out so I didn’t spend much time up there. I had spent quite a long time the night before so didn’t feel like I needed to plus it was mostly in the clouds.

Then began the riotous descent with an added twist of excitement! I’ve done many high speed descents but this one was different because of the turns involved. I didn’t reach the speeds of other ones but the turns made for an even more exciting experience. I didn’t have to brake but just felt comfortable enough to lean into the turns at speed. What a feeling to experience the sensation of weight as I put my body into the turns! There were very few cars but I did manage to catch up to pickup truck and after tailing it for a bit, I decided to pull over and let it go so it wouldn’t spoil anymore of the descent. I did this but then I saw it again but it wasn’t moving. It was parked in the middle of the road along with another car on the opposite side. I knew instantly that they must be stopped to watch wildlife and I was pretty sure what kind. Sure enough – a woman was halfway out the passenger window taking picture of a bear! I was about 50 feet behind the cars and watch the good-sized black bear amble away from the side of the road. Eventually the pick-up drove off and the other car came in my direction. It stopped and the woman driving it warned me about the bear AND its two cubs! I couldn’t see the cubs from my vantage point. I waited a bit longer and then decided to just go for it. I pedaled past and fortunately there was no pursuit.

I got out on 441 and then experienced another 13 miles of superb descending on such an amazing road with incredible scenery everywhere. I made it back to Sugarland where I was able to refill my water bottles. There was a bit of headwind but I still caught up to cars twice and pulled over to give myself free space.

By this time, there was much more traffic but because I was now descending, I could take the whole lane so it really didn’t matter. When I got back on Fighting Gap road, there was a surprising amount of traffic even there but I had no incidents. That last two miles to the cabin was brutal! I didn’t walk any of it but did have to stop a couple of times. My heart-rate was completely maxed out. At 112.90 feet per mile, this was the most climbing I've ever done.

My mapping software that I use for my cycling routes, ridewithgps.com, has a glitch and it won’t allow me to map past the halfway point of Clingman’s Dome Road. So the accompanying route map is missing the last four miles to the top. I was able to get the exact elevation gain though by seeing that the road ends at 6292 feet so I was able to accurately ascertain my climbing for the route. I’m attaching some pictures taken the night before. 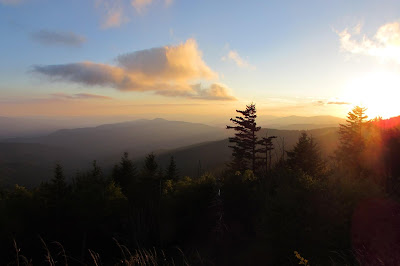 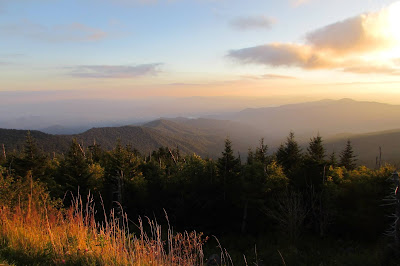 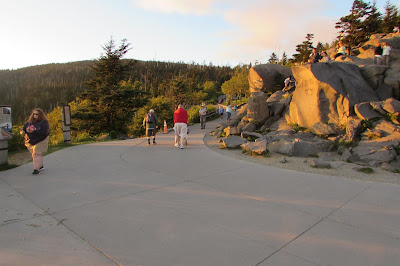 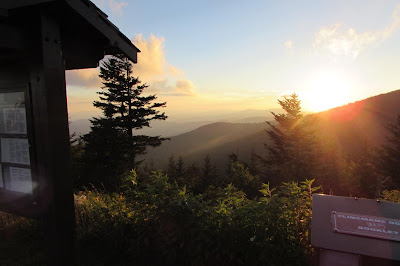 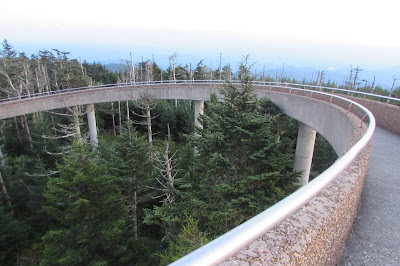 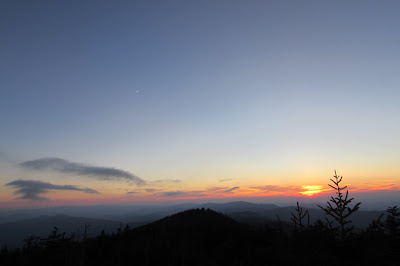 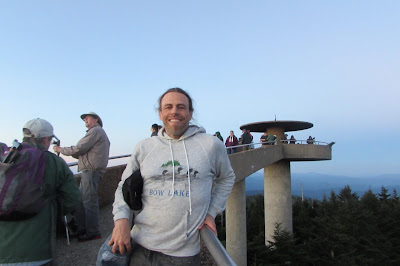