I’ve always had an interest in yoga, some for its physical benefits but even more for its calming, spiritual element.  Upon meeting Amanda, I was excited to learn of her expertise in yoga.  She taught me some basic poses and we went to some classes together.  Alas, my inflexible body never took to it that well but what has endured is our interest and participation in the chant practice attendant to yoga called kirtan.
We have attended several of these around the Boston area.  They were all enjoyable but some chant artists definitely resonated with me more than others.  These kirtans running between 1 to 2 hours in length would usually leave us feeling very relaxed and centered but imagine if we could attend a chant practice encompassing many artists over hours of time!  Such an opportunity presented itself this past Saturday.
We traveled to Montpelier, Vermont to attend an event called the Vermantra.  It was to last from 11AM to midnight with a list of artists including Tom Lena, Nina Rao, John de Kadt, Bonnie Argo, Adam Bauer, Brenda McMorrow, Anjula Prasad, Jeremy and Lily, Devadas, Dave Russell, Sri Kirtan, Terrance Pompey, Shubalananda, Irene Solea, Terrance Pompey and Yogi Patrick.
We got there around 1:30 and caught the ending of Dave Russell’s performance.  Before I even entered the large room where the chanting was taking place, I could hear it through the door and could feel my mental state already changing.  I was soon losing the stress from the 3+ hour drive and entering a realm of meditative calmness.
With one exception, we enjoyed all the artists as they took turns leading the day long kirtan.  I particularly was impressed with Nina Rao and the tandem of Jeremy and Lily.  Here the three of them led the chanting: 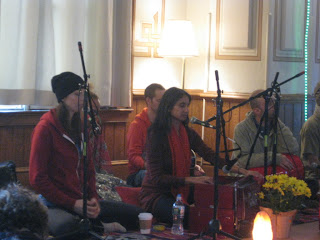 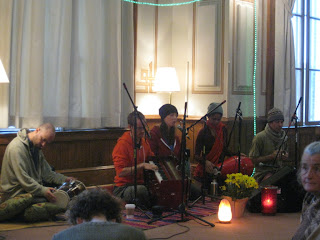 It's hard to describe the effect of these mantras vibrating through the air.  Their effect went far beyond the aural realm.  My whole body felt alive and involuntarily I moved in rhythm.  These three had the strongest effect on me and literally brought tears to my eyes.  I had never attended a kirtan that affected me this deeply.  I felt such a profound sense of joy and peace.  It felt like being transported to another realm free of the divisiveness that plagues society.  It was a glimpse into what humanity has the potential to experience if hatred and prejudice were cast aside.

As part of our package, we had arranged to be served meals there at the Vermont College of Fine Arts.  Reluctantly, we left just before Jeremy and Lily began their last chant.  The meal was pretty good and I'm proud to say that Amanda sampled the duck that was served: 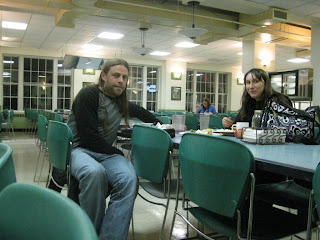 It was then back to the kirtan.  An interesting looking man with long hair and a beard was leading things. 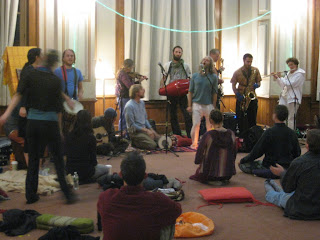 He produced the most energetic vibe of the whole event.  People spontaneously were getting up to dance and express themselves through movement.  We only caught his last performance unfortunately. 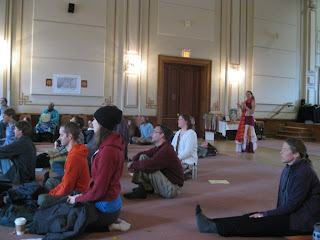 I just could not connect with the next artist.  The one after her was very good and specialized in slower chants that were particularly calming.  We saw all the artists except the last one when we finally headed for our beds on the campus.

This was the view looking to the back of the room where the chanting took place: 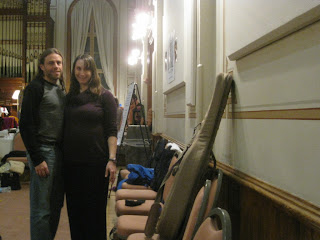 We drove around Montpelier a bit the next morning and enjoyed a nice breakfast at this restaurant featuring many types of crepes: 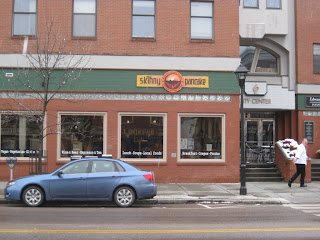 We then headed home content with amazing memories of an unforgettable event.

ETA: Check out this blog of the event complete with youtube videos of some of the chants, the best being Nina Rao's!
http://thebhaktibeat.com/with-vermantra-kirtan-storms-vermont/