I had a most enjoyable day riding on Saturday. The weather was perfect, low humidity with a touch of coolness in the air.
I went on all virgin roads in New Hampshire. I did a loop starting on route 112 in Lincoln then 118, 25A, 10, 116 and back to 112. It is the Mousilaukee region so I knew there would be some climbing but I thought it would be mostly on my return on 116.

It turned out I started to climb almost immediately and when I got on 118 I hit a three mile stretch with a posted 8% grade. That sure got me warmed up quickly. I was glad to have a 27 tooth cog to go with my 39 in front. The overall climb was about 8 miles so I knew the downhill would be nice. The sign said 7% grade for the downhill. It was twisty with not the best pavement. I got up to 48 and then did some braking. Not knowing the road and the twists had me chicken out.
From there the ride was comparatively flat over 25A and route 10. The roads were very nice with almost no traffic with beautiful panoramic views.

As I was turning onto 116 from route 10, I noticed a road construction sign. Further on it said the road was closed 6 miles up! I didn't know what to do because I had already gone 50 miles at this point so backtracking, especially with the climbing, was not looking attractive. I stopped and asked a man if he thought I could make it through. He indicated I would have to get across a river as the bridge was out. I decided to go for it. After a lot of climbing on a what was now an almost completely deserted road because only a few local residents now used it, I came to the road closed sign. Sure enough, there was a ravine with a river at the bottom. I debated taking my shoes off because of the cleats but decided to go with shoes. Crossing the river was a bit tricky but I only got my shoes a little wet. I climbed up the other banking and proceeded.

After some descending I rejoined route 112 to find more road construction signs. Turns out the pavement had been taken up for 3 1/2 miles. Most cars slowed down when passing so it wasn't too bad, just slower. After the construction, I really started the climbing. It was relentless up to a lookout over the valley and Mount Mousilaukee. After a brief rest there, I prepared for the descent. I saw the grade sign coming up. When I got close enough to see the figure, my heart jumped - 12% grade! And a good road! And fairly straight! with almost no traffic. My bike quickly went through the 40s and before I knew it, past 50 - I kept accelerating topping out at 55 MPH! What a rush! My legs were tired and shaking a little bit which at this speed translated into making the bike shake some. I was grateful to have good wheels under me. I have attached a photo I took of my computer.

I had always had a goal to beat 50 but didn't hope to do 55 on this ride. I would love to hit 60 sometime. I was solo so I'm thinking if there were a couple other riders to slingshot with on this descent, we might have reached it.
Final stats: 71.38 miles in 4:11:51 for an average of 17.01. My average speed really takes a beating in the mountains.

and the requisite photo of my cycling computer: 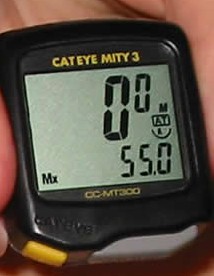