Amanda and I went to Ferry Beach in Maine this week.  It's located about four miles from Old Orchard Beach.  It's a retreat run by Unitarian Universalists but all are welcome to visit.  We had camped there last August but decided to stay in a room this time.  We knew the forecast was for unbearable heat but we figured we'd be alright because it's right on the beach.  Guests who reserve rooms also receive three meals per day included with the package so it promised to be a very relaxing experience.

We arrived on Wednesday afternoon and after putting our things away we headed to the beach.  It was late enough in the day that we didn't bother with our beach umbrella and the beach was gorgeous!  The water was very cold but we managed to go in some.  Here's how it looked: 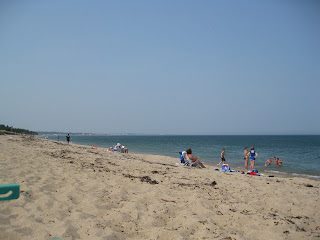 Amanda didn't go all the way in but here she is coming back from her semi-immersion: 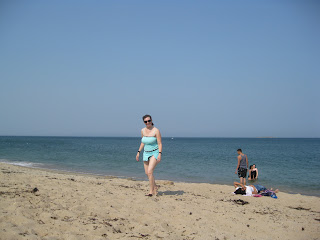 What is really nice about Ferry Beach is that it's not nearly as crowded as Old Orchard and it's quite an idyllic setting: 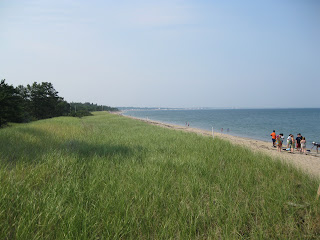 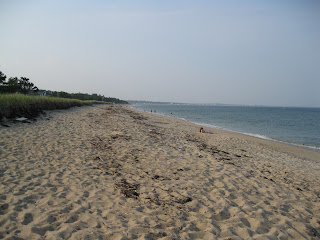 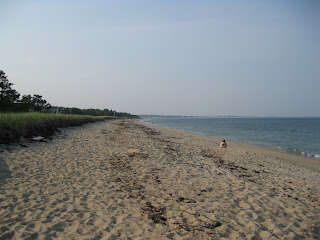 Amanda decided to do some yoga poses: 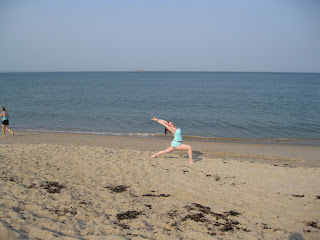 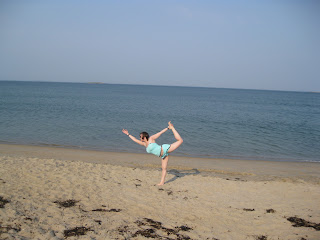 All went well until it was time to sleep.  The room has no air conditioning and it was a tiny cubicle of a room on the second floor.  The first night was bad but the second night was even worse.  I woke up at 3AM and realized my only chance to get back to sleep was to go and take a cold shower.  We spent a lot of time at the beach on Thursday and it was a haven from the ridiculous heat.  There was no sea breeze whatsoever though and the only way to cool off was to go in.  I think the heat brought out the bugs and I managed to get stung by a bee and by late afternoon, the flies and other pests had driven me from the beach.

We decided to take a break from the sun on Friday and planned to see the Harry Potter movie.  We figured we'd spend a little time in the morning at the beach and then see the movie around noon.  We totally struck out at the beach.  First, the beach umbrella we bought earlier this month turned out to be a total piece of junk and it gave out.  Secondly, the water was just too cold to go in.  Even just standing up to one's ankles was very painful.  I went all the way in once but it was very unpleasant.  Thirdly, the bugs were now downright vicious.  We gave up and headed into Saco.

We enjoyed a fine dining experience at Taco Hell with its delectable food selections.  We finished just in time to proceed to the theater and the first showing of The Deathly Hallows at 12:10.  Alas!  The heat had caused a power outage throughout much of Saco.  We tried to going to another theater but the next showing was for much later in the day.  We ended up killing some time at Borders.  They had advertised good deals with their going-out-of-business liquidation sale but these deals were not to be found - 10% off of full price?  By this time the power had been restored at the original theater and we went back to see the movie.  The movie was everything I was hoping it would be.  My favorite part involved Harry going into the pensieve and seeing Snape's relationship with Lilly Potter.  It was very well done!

We had paid to stay at Ferry Beach for a third night but we were really questioning whether we could stand another night in that hellhole of a room.  We went back and enjoyed a great supper and then tried the beach again but were almost immediately driven away but these pernicious biting flies.  We encountered a woman leaving the beach complaining that she had repellant on and it was doing no good whatsoever.  That sealed it for us.  We decided to forfeit the last night and the two paid-for meals the next day.

We were a bit disappointed overall as our experience last year had been much better.  In Ferry Beach's defense, however, such intolerable heat is a rare occurrence there.  I think if we ever go back, we'll schedule our stay for late August in the hopes of avoiding it.  It is risky to schedule staying in a non-air conditioned room in July.
Posted by Jason at 4:06 PM